Good morning all and welcome to the last of our Freaky Fridays in this years Challenge.

Our Guest Host today is Justice Clarke AKA ‘Flowetic Justice’

The topic for today is: Sexual Metaphor

You know what you need to do… read the ink that he has sent to grace the page – get your creative juices flowing and be inspired!  ~ Marina

“My Dictation”
by Flowetic Justice

The Topic for today is “Blessings”

Whilst reading the piece by today’s Guest Host, I was reminded that not all Vents need to be loud or in your face – some are about the quiet reality that we meet each day. So I give thanks to you for this write, on a number of different levels .  I am honoured to be in the position to share the work of today’s Guest Host: Justice Clarke aka Flowetic Justice

Flowetic Justice has been working with his imagination since he was a teen. He began writing and illustrating his own original comic book stories at the age of thirteen. He dabbled in poetry a bit at fourteen but those few scripts evolved into rap. He began exploring the world of hip hop at fifteen. He has opened for legendary rap acts such as Grandmaster Flash and the Furious Five, Dougie Fresh and Slick Rick, and L.L. Cool J.

He took a break from this while he majored in Psychology at New York University where he earned his degree . It was there that he learned that he had a knack for writing. He then spent several years working in the mental health field as a drug and alcohol counsellor and a clinical therapist. Due to a near fatal car accident, personal hardships, and emotional struggles he begin to write what he was feeling as a coping mechanism.

In 2010 Justice won the Blood Sweat and Tears poetry slam and began to concentrate on writing his first poetry book. Since then he has published six books all of which are available https://www.smashwords.com/profile/view/Flowetic. 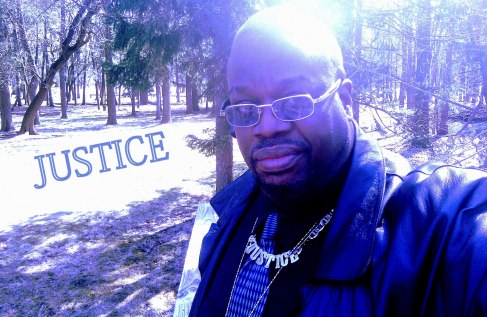 “A Blessed Day” by Flowetic Justice